Daidal Pty Ltd (est 1992) is an Australian owned and operated Business and IT Consulting firm specialising in Project Management, Design, and App Development, as well as a number of other project related services.

Daidal principals have a track record of projects that achieve the stated business and technical requirements, completed on time and within budget. This translates into lower cost, consistent quality and predictable deliverables with no miracles, only hard focussed work on predictable events.

Daidal is differentiated from the competition by a pragmatic approach based on extensive technology and business knowledge combined with a specialist focus on delivering high quality services.

"Delivery on Time, Budget and Scope" is our key driver.

Daedalus (Daidalos) (Gk legend) a craftsman who is said to have built the labyrinth for Minos, king of Crete. Minos imprisoned him and his son Icarus, but they escaped on wings which Daedalus made. Icarus was killed when he flew so near the sun that the wax attaching his wings was melted and he fell into the Aegean Sea, but Daedalus reached Sicily safely. Daedalus was considered the inventor of carpentry and of such things as the saw, axe, plumb-line, auger and glue, as well as the mast and yards of boats, and is credited with making figures which had open eyes, walked and moved their arms. It is uncertain whether a historical artist gave rise to the legends, or whether Daedalus is a mythological figure representing accomplished craftsmanship.

The logo is made up of our company name 'Daidal' using an original font and a hexagonal 3D mobius surounding a cube. The font was created by Alex Alexander.

The three facets of the cube represent the three aspects of what we deliver; Project Management and Consulting (Daidal), App Development (Epidexia) and Design Services (CoolDeer).

The gold and blue hexagonal three dimensional mobius represents our ability to engage a different aspect of our skills depending on the situation.

All of this brings into focus the definition of our company name: Skillful, inventive, manifold... 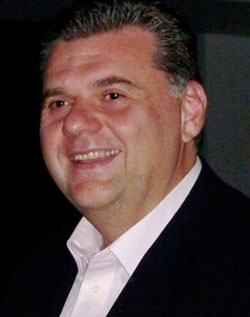 Alex Alexander MACS(Snr) PMP, is the Principal of Daidal P/L, with over thirty years IT & Business experience, specializing in Project Management, Consulting and Creative Design.